...and now I'm addicted so this post is just a placeholder so I can add the Thai script to my Pinterest board for copying and pasting. Email ThisBlogThis!Share to TwitterShare to FacebookShare to Pinterest
Labels: tattoo

My friend Kelly has been super generous with baby stuff since I had my daughter, so I wanted to thank her with a custom made 'something'. She had chosen the material a while back with the request for a dress, but alas - we realised too late we didn't have enough material, and that pattern was no longer available. So today was D-day, and Kel decided on a top and dress for her daughter. My first time making something from 'virgin' material for someone else so many, many, many tryings-on later, voila! (Isn't my model gorgeous?!)

When the little' un came along, chums were very generous with gifts of clothing. I know my friend, Claire, had been awaiting the arrival so she could pass on her funky fashion and this was one of the first things my daughter wore. (Claire told me lemons were very much 'on trend' - as if I didn't know...ahem...) 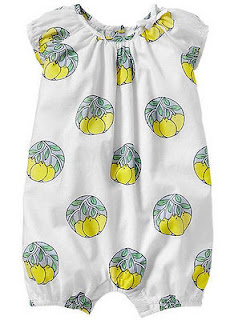 My little girl wasn't born so big, but she soon outgrew this 0-3 month piece and it's been on a teddy in her room ever since; no longer were we able to fasten it around her ever-chunkier thighs. Well, nothing - not even sentimental items - are safe from my upcycling fever so after making sure it still fitted everywhere else, I carefully cut around the bottom edge and sewed in some double-layered 5rm Daiso cotton lace ($1 - actually 0.50 cents as I only used half the packet). The result - a top she can wear for at least a couple more months. I only wish I'd thought of it earlier as she's now over 9 months. Anyway, it's a win - thanks Claire! 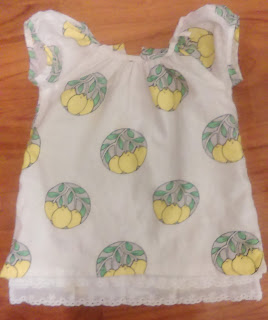 I Followed a Pattern!

My sewing adventures so far have been a bit of hit, a lot of miss and rarely following the instructions. So, I am particularly pleased that I have finally managed to follow a pattern to the letter, with some great results. I'd had this crossover dress from Smashed Peas and Carrots on my Pinterest board for a while, so yesterday I decided it was time to tackle it (much motivated by my desire to keep my daughter out of grossly over-flowered and over-pink outfits).
Staying true to my upcycling commitment, the blue side was a 1rm (15p / 20c) sleeveless blouse from a 'bundle' shop in KL, and the spotty side was one of my baby's receiving blankets. 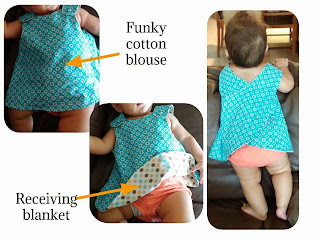 Although it's a bit big yet, I couldn't resist trying it on her and I'm really please with how it turned out. Usually when I go to try things on her, I realise the armholes are too tight or she can't get her head through so this was a definite win. Next challenge: diaper bloomers to match! 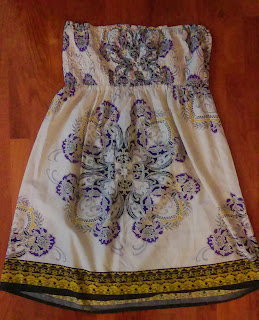 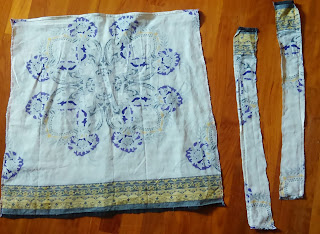 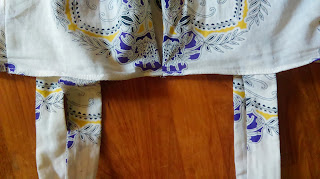 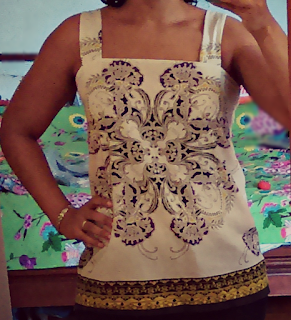 From the minute my 6-year-old learned what a sewing machine could do, he's been asking for a 'David Tennant' suit. My husband clarified that he meant Dr Who but when I looked up Google Images, I thought, 'Not in this lifetime matey!' - way too complicated for a beginner like me.
In the meantime, a good old rummage through the mountain of clothing in Sharin's Bundle Shop, I unearthed this groovy pin-stripey dress. 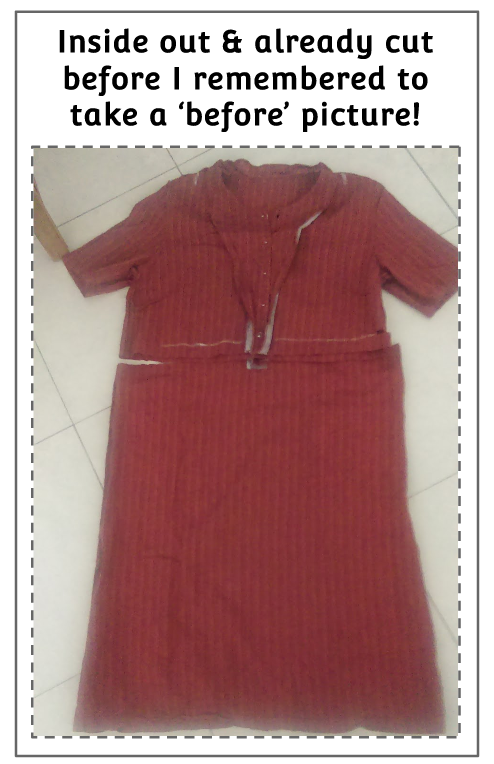 I wasn't entirely sure what I'd do with it but the fact it was cotton and 1rm (about 20p in the UK or 30 cents in the US) was enough to convince me; it's nigh on impossible to find anything apart from synthetic clothes in high street shops these days, so I knew I'd put it to good use.
Once washed, it was added the ever-growing pile of material by my machine where my son spotted it and announced it was just what was needed for his David Tennant costume. After some negotiation, he instructed me to make a waistcoat which then led to him eyeing up the remaining fabric and asking, 'What about the trousers?' (He doesn't miss a beat.) Only a few swear words later (internally uttered of course) and a bit of old red t-shirt - voila! Something of a David-Tennant-Dr-Who costume that took around an hour. 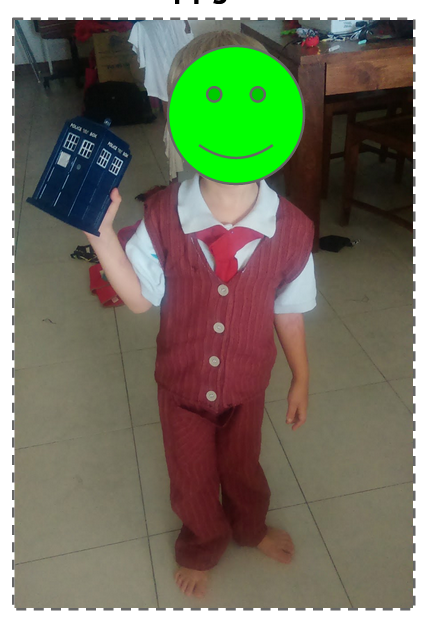 It's far from perfect, and missing the full-length coat (gimme a break!) but my son's happy and he asked me as I finished off, 'Are all mummies magic?' Yes they are son!

I'm determined to make my way through my Pinterest board of 'easy peasy sewing' items. That might be somewhat impossible as I am adding to it faster than I'm making, but you gotta have a dream...
This tutorial from 'Make It & Love It' was too tempting given my recent pregnancy and the resulting multitude of maxis now sitting unused in my wardrobe. (What is it about maternity clothes that no matter how much you loved them with a bump, they totally lose their attraction once the baby is out?)
Unusually for me, I followed the instructions and was delighted with the results: so much so I immediately donned it for lunch. This 'eating skirt' is stretchy, comfy and cool - what's not to love?!
After lunch, I was still buzzing so grabbed another skirt and - true to form - decided to 'interpret' the instructions and add in a hidden elastic instead of sewing it on as a waistband. I won't be doing that again in a hurry, mostly because the elastic threading thingy (yes, that's the technical term) kept dropping the elastic meaning I had to undo stitching in the end to get it through. Nonetheless, it came out well and is as wearable as the first one.
Must. Not. Get. Addicted. 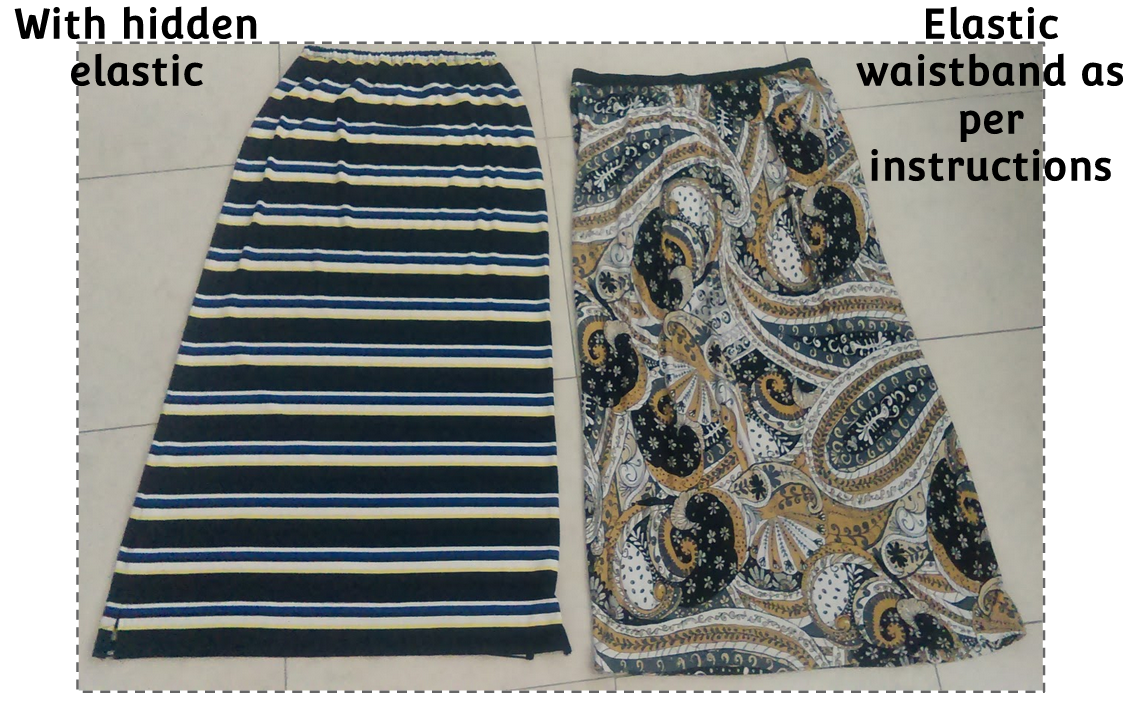